While doing research for my new book about Julian Ritter, I came across a series of letters from Howard Morseburg. Howard was one of the Dealers / Gallery Owners whom Julian worked with over the years. Howard was the only dealer that Julian ever trusted, and whom he considered a true friend.

When I was actively collecting I worked directly with Julian in Commissioning new works, and purchasing paintings he had around the studio. I was in fact, one of his Patrons after he quit "Gallery Shows." Julian always had dozens of paintings in the house and studio. He lived on Torito Rd, in Summerland  at the time I knew him.

The house in Summerland was on about two acres (I'm guessing here) of wooded land, with a beautiful little creek running through it and the studio was a separate building out back. One year after fires, then heavy rains, the creek overflowed. As Howard used to tell the story, Julian didn't trust banks, so he had buried probably thousands of dollars, in hundred dollar bills, in coffee cans throughout the property. 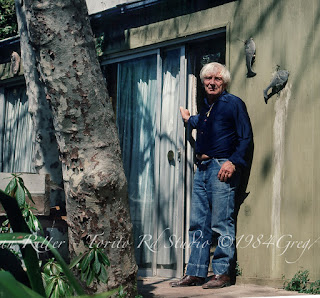 The results were hilarious and typical Julian. Oh Yes, you'll have to buy my book to find out what happened :)

Howard and I communicated often during the time I worked with Julian, and we kept in touch regularly after Julian passed away.  His last Gallery was in Solvang, in Central California. The last couple of years Howard was disabled and could barely get around.  But he loved to go to an old coffee shop in Solvang, what the kids today would call a Diner.  We'd go and spend hours talking  about Julian and I was lucky enough to have recorded some of our conversations.  On one occasion Julian's long time model and muse, Janet Boyd, went to Solvang with me to see Howard. Howard had a twinkle in his eyes that day, much like Julian used to have around beautiful women.

In the letters I found, Howard had sent to me photos of Julian's paintings he was trying to sell at the time. Two beautiful examples of Julian's work, one called  "Ballet Fantasy" and the other "Clown with Accordion."  Names for paintings were often made up on the spot. Also the names would sometimes change when they couldn't remember what they had called the painting before.


These are two superb examples of Julian's work. I suspect these are from the late forties or early fifties, although they could be earlier.  I will need to do more research to determine the years painted. The "Ballet Fantasy" painting is very rich and very complex, with layers of glazing which Julian had perfected by then and continued to use thought his career.  Also note how he used the dark cool tones of the masonite structure to create contrast and drama in the pieces. Lastly, Julians specialty was to use the negative space in a very active way, to construct shapes and to hide pertinent details within. 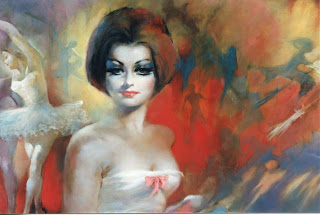 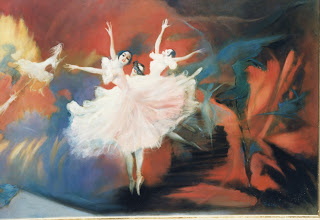 As did Julian, Howard Morseburg served proudly in the military, he wrote poetry, and he sold Art. He was an old time "Peddler". He used to go out on the road and make stops at regular customers to sell his artist's work.  Very similar to what Julian liked to do with his own art.  I'm sure they bonded with that connection.

Julian's last big art show was held in 1975, at Howard's gallery on Wilshire Boulevard, in Los Angeles. The show was called, "JULIAN'S WORLD". After that, Julian declared he was no longer working with Galleries. He simply didn't trust them, although he continued to work with Howard. 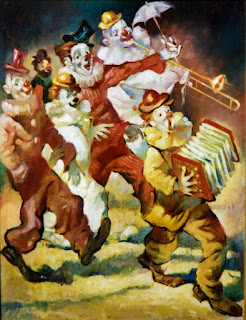 Julian did not handle events such as art gallery openings well. He would always drink too much and when he did, all decorum went out the window.  Howard told me that in a drunken state Julian was overheard telling a potential customer not to buy the painting at the show, to come see him at his studio.  I asked Howard directly, why he would continue to work with someone who basically, tried to cheat him.  Howard's response without forethought was simple, he said, " I Loved The Guy".

And it was that love, that joy, that spirit of life that Julian spread with his art, his life, and his personality. As for Howard, he was a true gentleman. A man from a time when honor, and honesty, and a man's word meant something. Howard passed away in December 2012 and is survived by his son Jeff Morseburg, who is also an art dealer in Los Angeles, California.