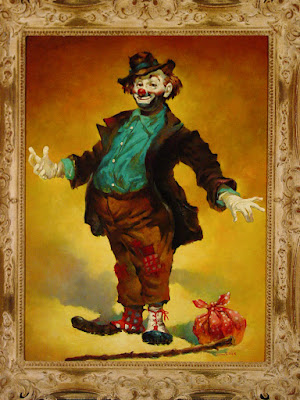 This painting is the original `Mr. Whimsey.'  It was originally painted by Julian Ritter as part of a series of commissioned works of clown paintings to be titled `Mr. Whimsey and his Dog,' for the Colson Company, in Illinois. While considered the best of the series, the Colson Company declined to accept the paintings as these two were not in keeping with the theme.   Subsequently, along with it's mate `The Clown Photographer,'  both painting's were dealt to Benny Binion and Doby Doc for the Frontier Hotel, and would later be hung in the Gaiety Theater, inside the Silver Slipper Casino and Gambling Hall in Las Vegas. From circa 1950 through 1988 these two Clown paintings were a part of the famed Silver Slipper Collection, by Julian Ritter. 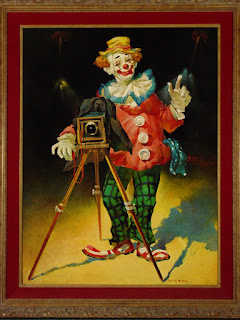 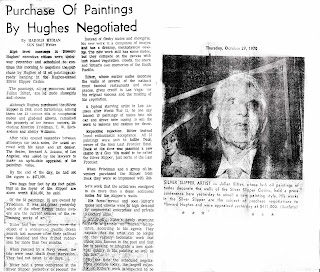 These two paintings, and indeed the entire collection of paintings have a history of fame and litigation . After Howard Hughes originally purchased the Silver Slipper Casino in April of 1968, the entire Collection would become the subject of a lawsuit between Hughes and The Mob, because when Howard Hughes bought the Silver Slipper, the Mob declared that he failed to include the paintings and furnishings. The courts ruled the paintings, even though they were attached to the walls, as furnishings and Hughes had to negotiate a separate purchase of the paintings. The FBI reportedly even got in on the investigations.

In 1970, not long after Julian had been Lost at Sea for 89 days, and narrowly escaped death in a last minute rescue by the USS Niagara Falls, Julian Ritter and dealer Bernie Schanz were summoned to Las Vegas, to appraise the collections.  The entire Silver Slipper Collection was valued at $ 471,000.00, including the two Entry pieces which were valued at $ 110,000.00 ( $ 55,000 each). 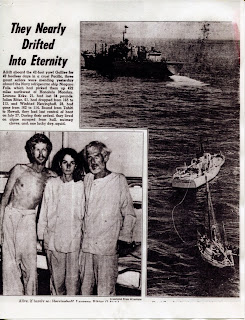 The year that Julian had set sail on the Galilee, 1968, `Mr. Whimsey,' aka The Hobo Clown,  was also the subject of a search by Sheriff Lambs Detective, when it was stolen from the Silver Slipper. It was stolen by a couple who just liked it. It was found relatively quickly by two of the Sherrif's detectives, and was said to be hanging on the wall, inside the "guys" apartment. He didn't steal it to sell it. He just loved the painting so much, he wanted to have it in his home.  Better that the Detectives found him, than any of the `family members.'

Mr. Whimsey, aka The Hobo Clown, and The Clown Photographer are two of the Masterpieces from the Golden age of Julian Ritter, and a distinguished part of the famed Silver Slipper Collection. You can read more about the rich history of Julian Ritter, his art and his adventures, at www.JulianRitter.com.