I am asking for your donations/gifts to raise funds that will enable me to complete my book about Julian Ritter, and get it off to the editor.  Julian was a friend, and mentor, and one of the great artist of the twentieth century. I have dedicated myself to write a book about Julian's amazing life and his monumental art.  I'm getting close, and can use your help to get over the finish line. Please click `Donate Now.'  Your Shares on Facebook and Twitter are also greatly appreciated.
WHO I AM  and  WHY THIS NOW.As an adult, I worked to build a business and raise a famaily. I began to collect art seriously in the late 1970's and became enamored of the `Salon Nudes' painted by the artist Julian Ritter. My initiation into the world of  art as an `Investment,' had a somewhat rocky initiation. Around 1982 I purchased an "original" Julian Ritter oil painting at a very renowned art gallery in Laguna Beach, California. 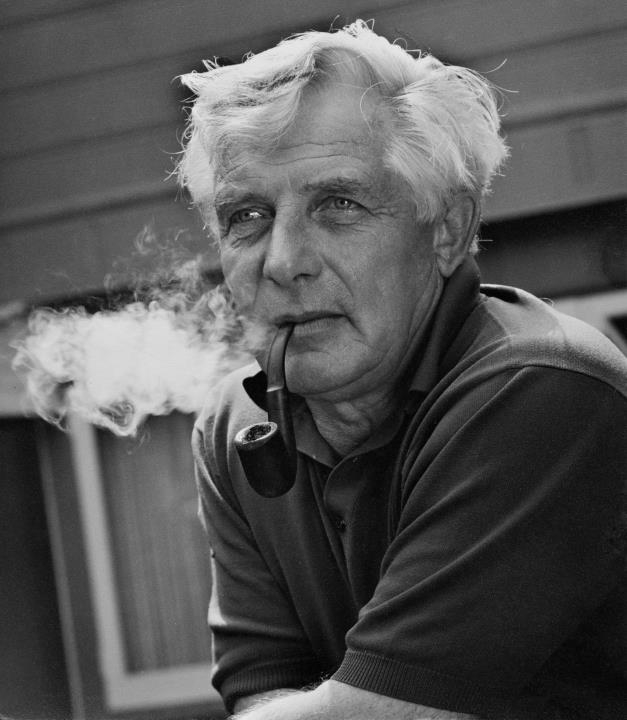 Artist Julian Ritter circa 1950I thought I had negotiated `quite the deal,' and also found that Julian was alive, still painting, and lived in Summerland, California (just south of Santa Barbara.)  I was excited beyond words when I arranged to meet Julian and show him the painting I had just purchased.My first meeting with Julian was profound in many ways. First and foremost, I was delighted and honored to meet Julian and Laurie Kokx. Secondly, I found out that the painting I had purchased, was a fake. And NOT a very good fake at that!Restitution was made regarding the fake painting, and more importantly I started a lifelong love of a man I believe is one of the greatest artists of the Twentieth Century.I commissioned Julian to paint a portrait of my wife Yvonne, and later, another commission for a large painting in Las Vegas which is now well known as the `Las Vegas Fantasy.' I purchased paintings directly from Julian and in 1988, I purchased a collection of 28 paintings called the `Silver Slipper Collection,' from the Summa Corporation in Las Vegas, Nevada, when the Howard Hughes estate was settled after years in litigation. 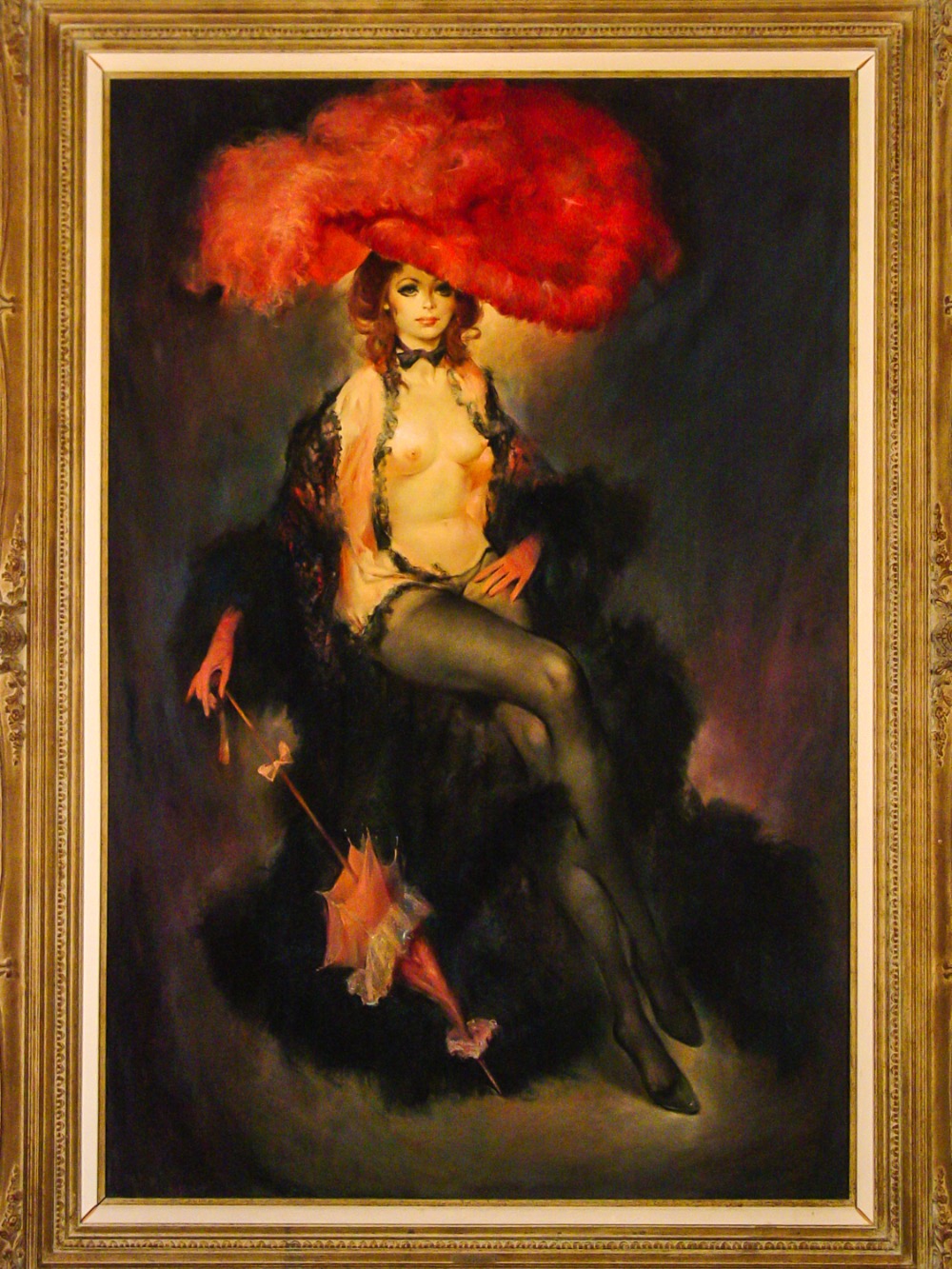 `Portrait of Janet' by Julian RitterI met Julian a couple of years after my own father passed away. In addition to his art, I came to love the man deeply. I felt a deep connection to him, his work, and what he was trying to say through his art. 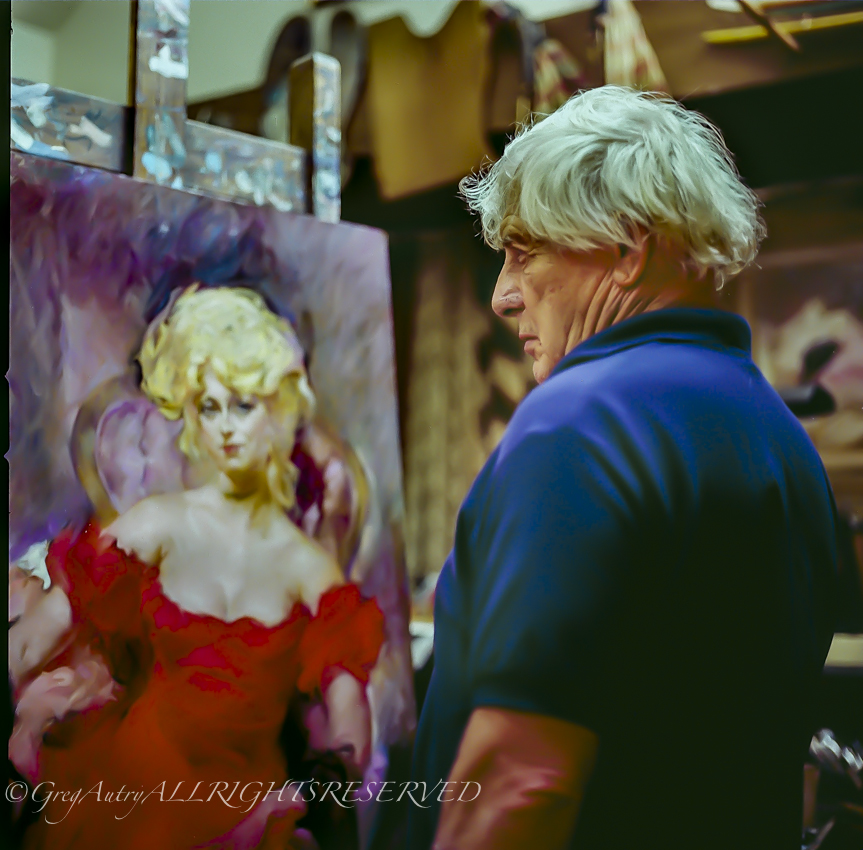 Artist Julian Ritter painting the `Portrait of Yvonne,'                    1984, Torito Road, Summerland , CaliforniaJulian passed away, at the age of 90 in 2000, three days after my mother passed away.  I had tried to promote him when he was alive, and after he passed, I rededicated  myself to telling the story of the `Life and Art of Julian Ritter.'  Thus the theme of the book I have commenced to write.It is around 34 chapters and 800 pages, in a rough second draft. Here is a brief description of three middle chapters from the book:`Renowned Artist Julian Ritter sat sail in the "Galilee," leaving Santa Barbara behind, after the death of his beloved wife Hilde. Months later, disheveled, in jail in Acapulco, he was out of hope and out of time. His last desperate act, when given a chance to make a call from jail, was to phone Laurie Kokx in Santa Barbara, California.  In a life saving attempt Laurie arranged a private plane to fly to Acapulco and to bail Julian out of the Mexican jail.  Safely out of jail and revived, a month later, 60 year old Julian Ritter and 17 year old Laurie Kokx announced that they would embark together to sail to Costa Rica and on to the Tahitian Islands. After spending three years, living his childhood dreams of sailing the Islands and painting, Julian and Laurie hired another crewmate and would set sail for home, first bound for Honolulu. Within a couple of weeks however, things began to go wrong. The engine conked out, the radio was on the fritz, and lastly, they were caught in a severe cyclone, which crippled the 45 foot yawl Galilee. Their mast broken, severely off-course, no way to steer or to communicate, they were lost at sea, emaciated and within hours of death.  Lost at sea for 89 days, the last 49 days with no food, they were miraculously rescued by the USS Niagara Falls, where upon the Navy Doctor, Lt. Phillip Becker, immediately had them taken to critical care in sick bay aboard the ship.' 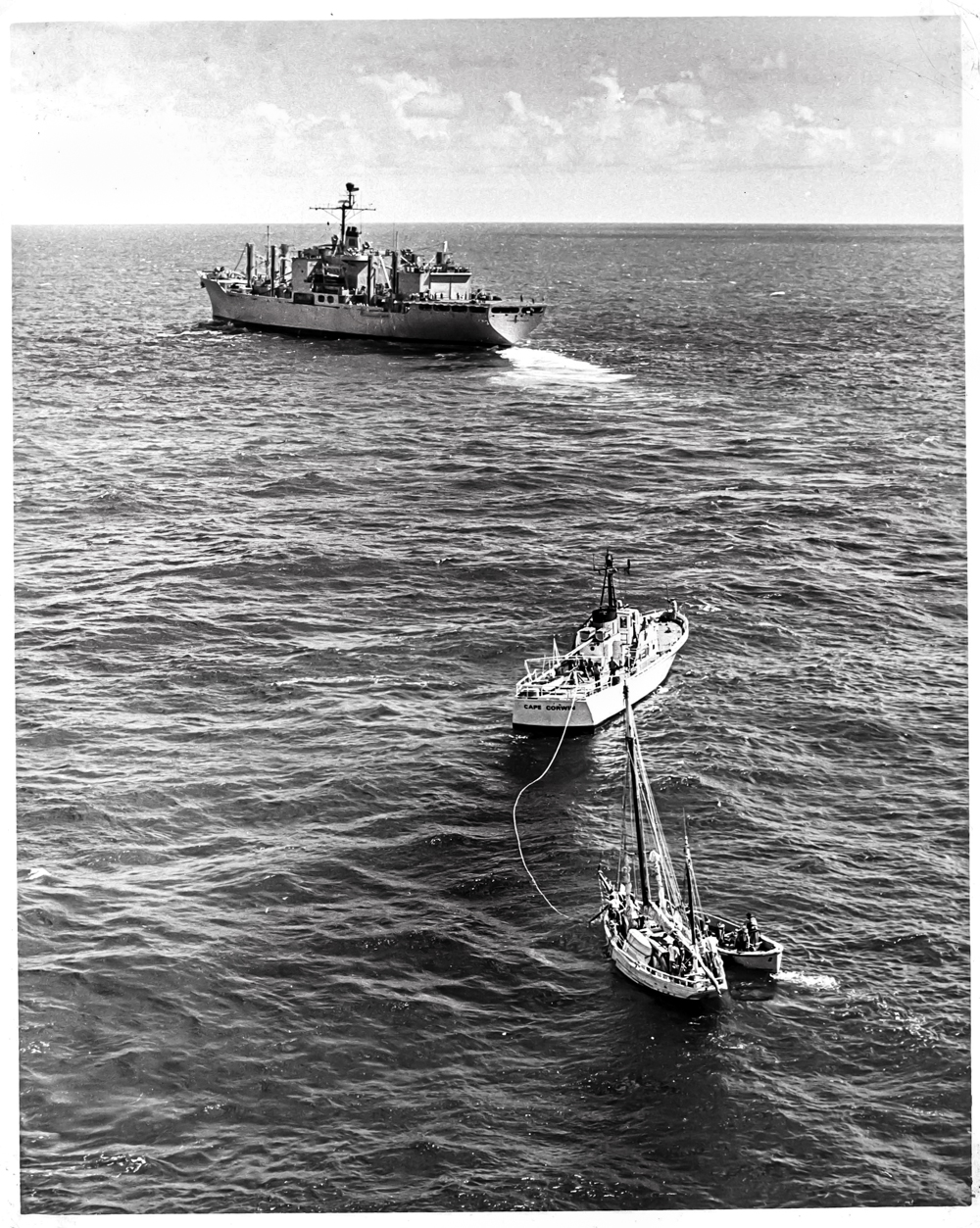 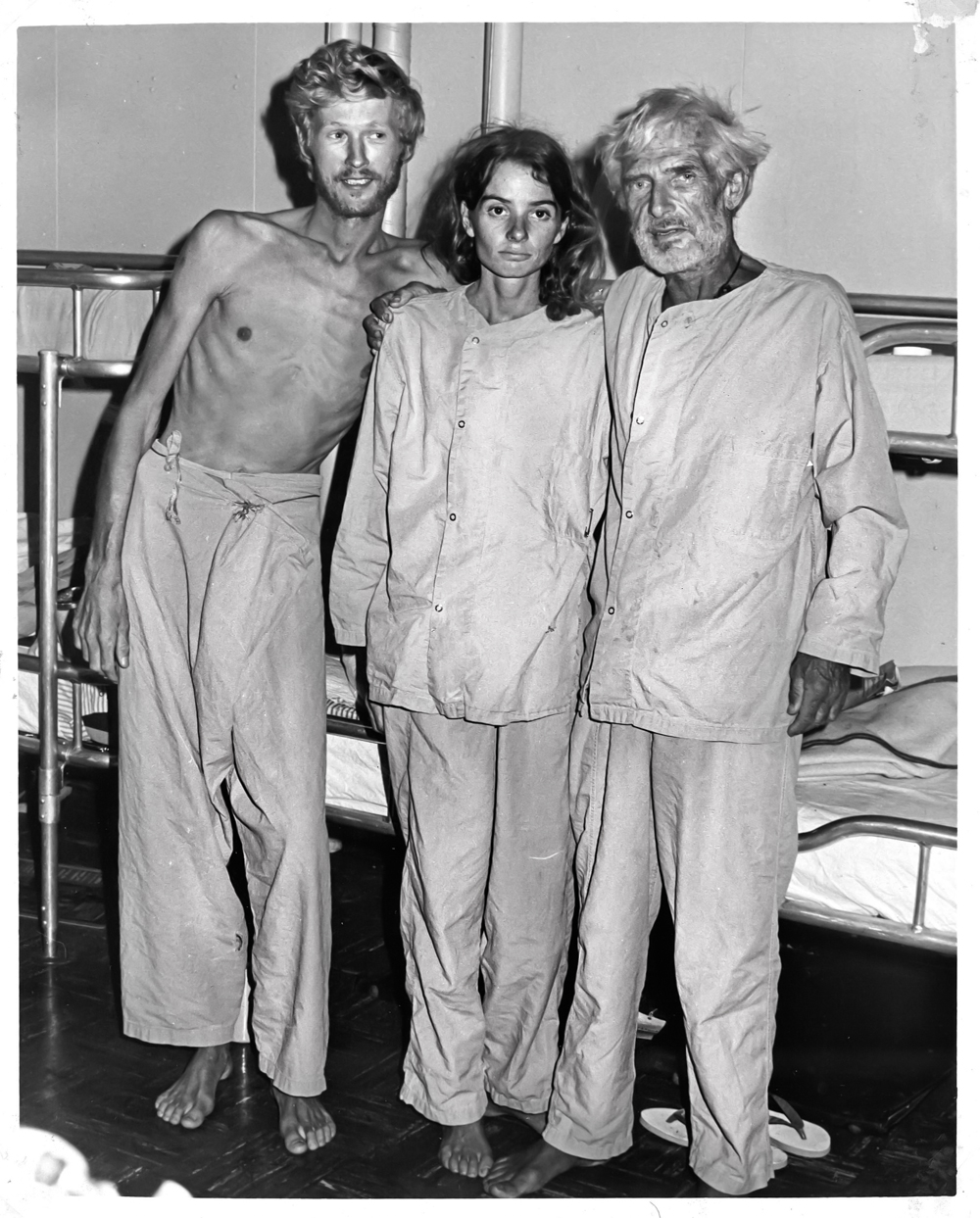 `Sick Bay' of the USS Niagara Falls, days after rescue of           Winfried Heiringhoff, Lauren Kokx, Julian Ritter.Brought back from the brink of death, Laurie and Julian eventually made it home to Santa Barbara, settling on Torito Road in Summerland, California.  This is only a portion of what I've written to date, telling the story of a man whose life adventures, personality, and character at times overshadow his art, and who may be truly one of the greatest artists to ever have lived. Foolishly or not, Julian disdained the art world which he relied upon. He lived his life true to his beliefs and always in pursuit of his art. 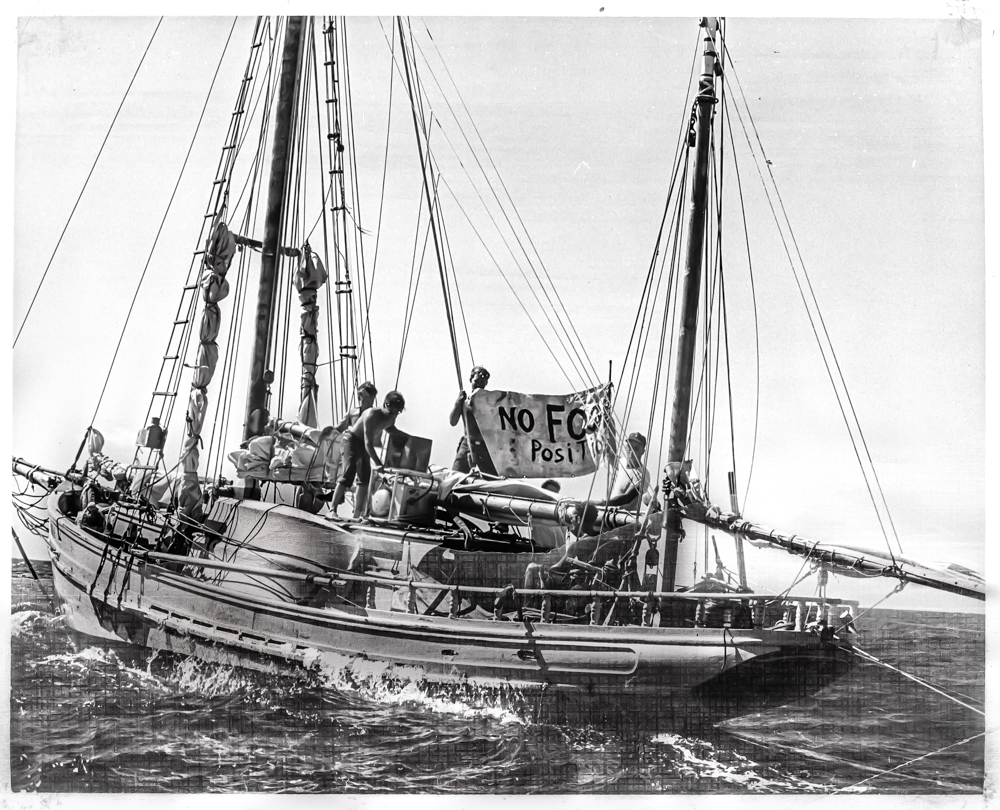 Sept 14, 1970  `Galilee' in distress                            "NO FOOD, NO POSITION"  I made the decision to start the book, based on my intimate relationship and conversations with Julian over many years. He told me many stories, and we talked about art and his life's philosophy whenever we were together. Now I still need to do a signifcant amount of research.  Part of the research needed to be done is about Julian's history in Las Vegas. Julian's `Golden Years' as I call them, were the 1950's, when he painted the bulk of the Silver Slipper Collection a well as  having major art deals all overthe country.In 2015 I decided to move to Las Vegas, to do research and to physically start the book, while Sandy, my wife moved  back to San Jose to be closer to her family. Thanks to the firm Sandy works for, who allowed her a transfer to their Palo Alto office.  In Las Vegas I started and finished the first draft of the book, and began the second draft, the first rewrite. I also met a wonderful editor in Las Vegas, who is accomplished and is familiar with Julian's  paintings that used to hang in the Silver Slipper. 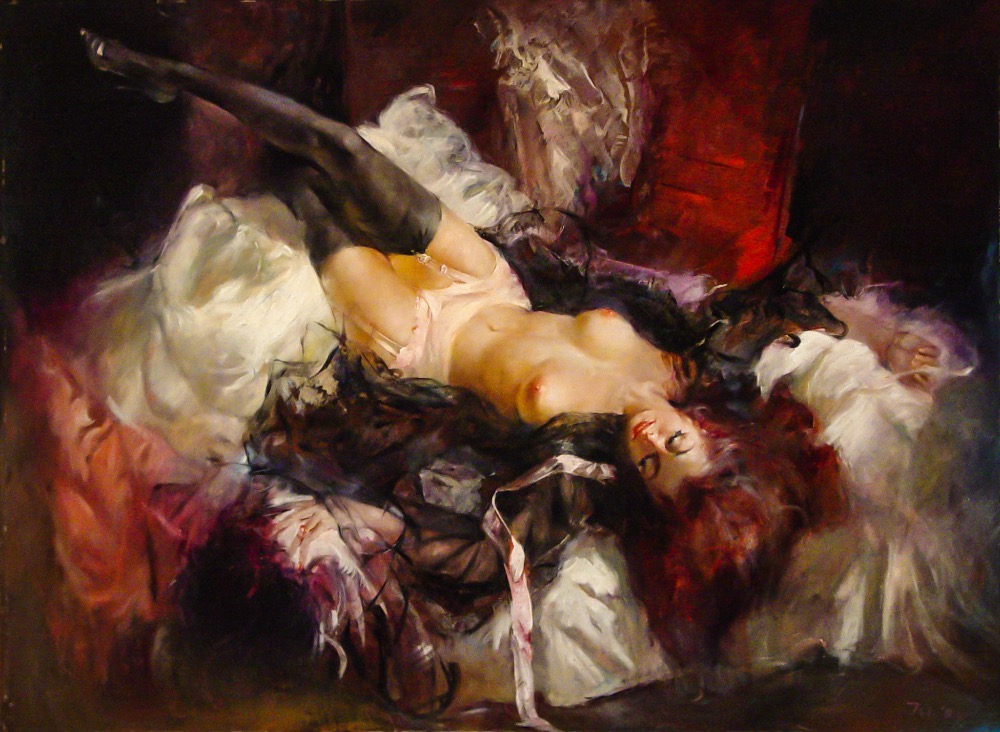 `Entry Piece'    Salon Nude by Julian Ritter - Silver Slipper CollectionWhile I do not consider myself a "Writer," per se, I have been doing some writing.  A few years back, while photographing  a fashion show  `For The Stars,' on Melrose Ave in West Hollywood, I met a publisher  who liked my photos and asked "If I write ?"  "Of course I do," I replied. Thus Lawrence Davis gave me a "job" as a photojournalist for LA Splash Magazine.  Writing for LA Splash  Magazine does not pay, in cash, it has however offered me opportunities to improve as a writer, as well as other opportunities to cover events and meet  people I would not have the opportunity to meet otherwise. Sadly, Lawrence Davis passed away in 2015. He had become a dear friend and I miss him every day. I continue as a photojournalist for LA Splash Magazine, in thanks to Lawrence and to continue my writing discipline. 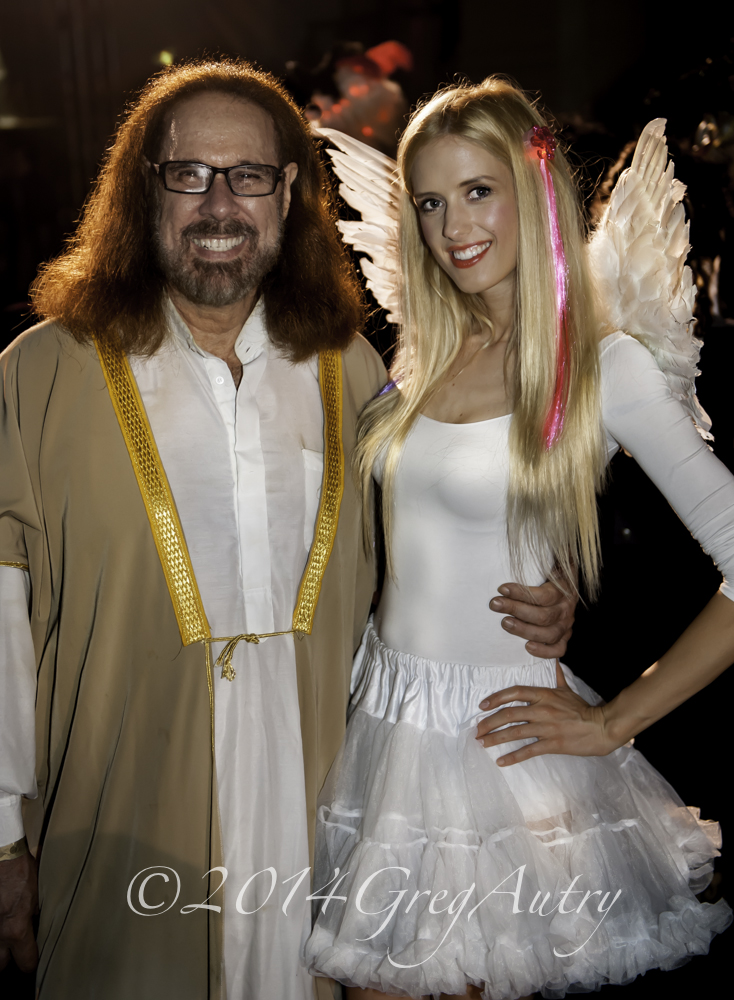 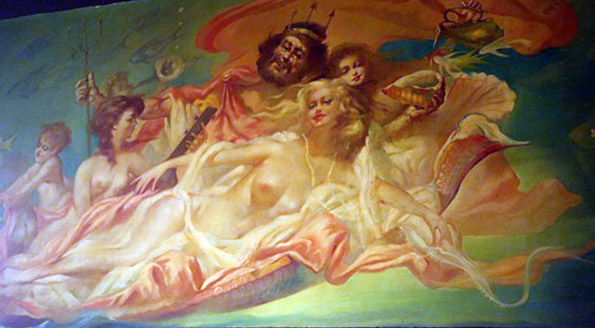 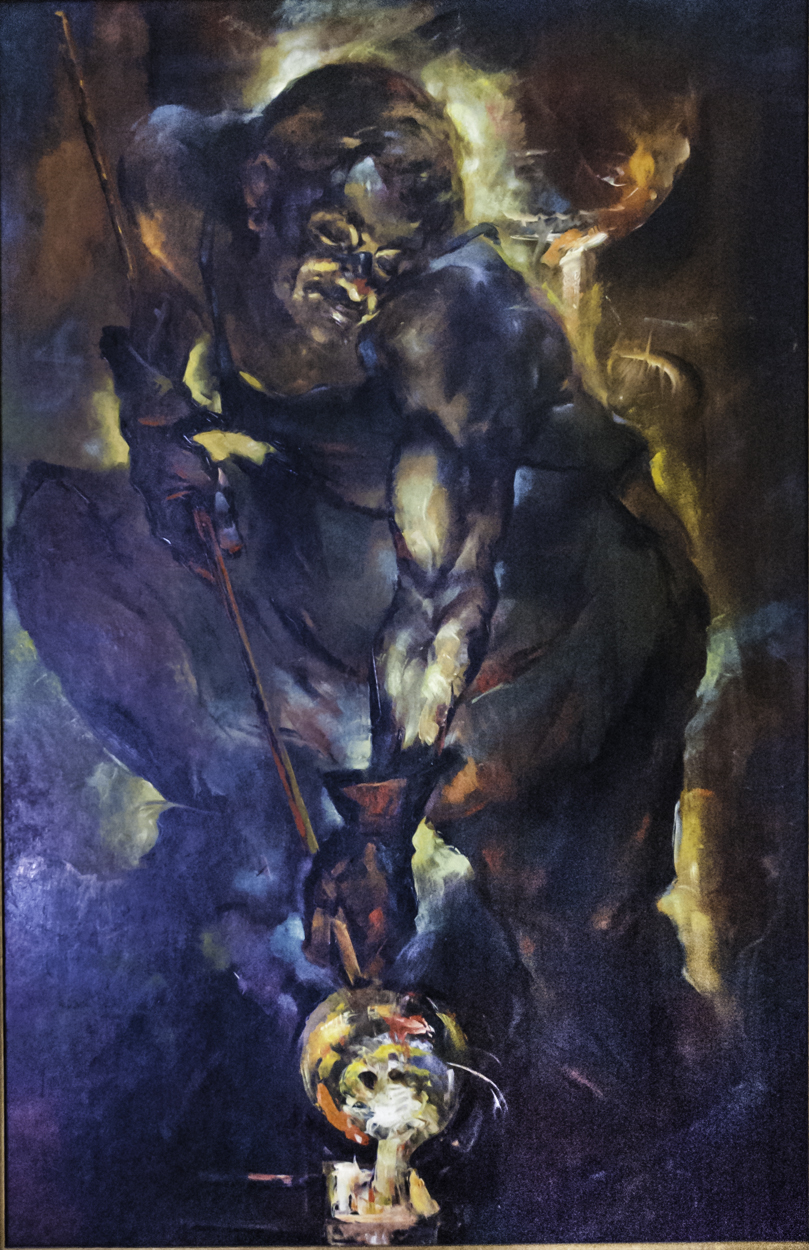 `Steel Worker' circa 1938 study for Mural              1939 Golden Gate Exposition San Francisco                 Mines Minerals and Machinery BuildingsWe are a little more than three years away, from the fiftieth (50th) anniversary of the rescue of the "Galilee" on Sept 14, 1970. I will consider myself accomplished when I have fulfilled my promise to Julian, to let the world know that he was unique, and one of the greatest artists that ever lived. You can follow updated stories and posts on the Julian Ritter Facebook Page, as well as the Julian Ritter Blog, which I write and post weekly. At the Julian Website you can read some of the "stories" that are the basis for other chapters in the manuscript, and see more photos of an array of Julian's paintings.  To get an idea of my other interests and pursuits, take a look at some of my Articles in LA Splash Magazine . Of course there is an Article about Julian, as well as renowned Las Vegas Showgirl, Janet Boyd. My own, Facebook Page, Greg Autry,  as well as my Facebook Page titled,`Greg Autry Art & Photo. '  are portals into my life of art.  I Thank You now, for whatever you can do.  Your gift is valued and is greatly appreciated.Greg AutryAuthor of the book - `The Life and Art of Julian Ritter' 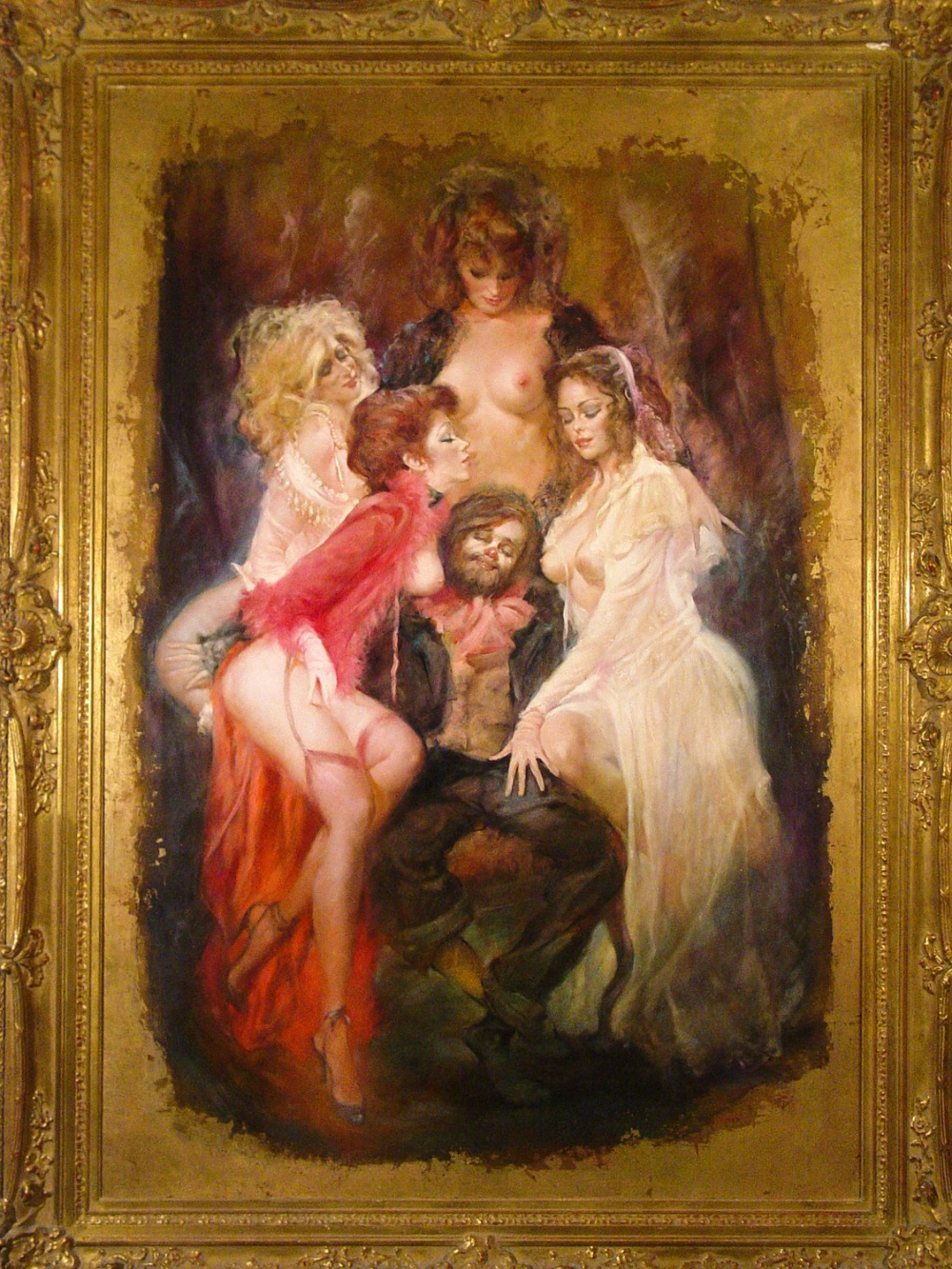 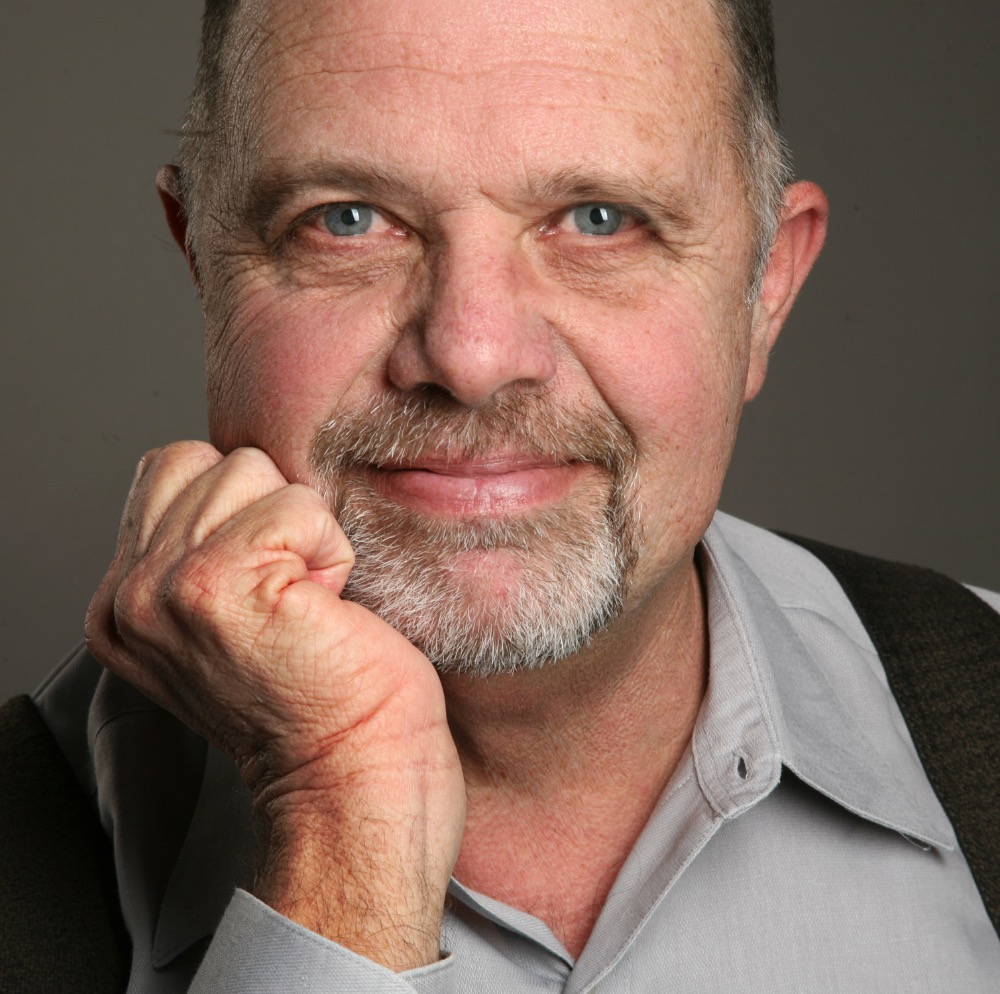 Greg Autry - Author
`The Life and Art of Julian Ritter'
Posted by Unknown at 9:20 AM No comments:

Salon Nudes from the Horseshoe and Silver Slipper Casinos 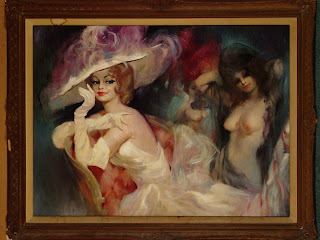 This painting was discovered when I purchased the Silver Slipper Collection, at the side of the main bar.  It was first hung at the old Horseshoe Casino, or the Frontier Hotel by Benny Binion, and Moe Dalitz, in the late 1940's. Which Casino, is still in question. Then it was moved to the Silver Slipper when the new remodel was done.  Benny and Moe had envisioned  a Casino, with grandiose Bars, "like an old high class Bordello.' And thats what they got.

Julian often re-incorporated models and poses into subsequent paintings. Here Julian juxtaposes the stylish "proper" socialite, in white hat, gloves, and gown with the flaxen haired nude vixen on the right. Contrasting the sin and virtue of Las Vegas and the women it drew. 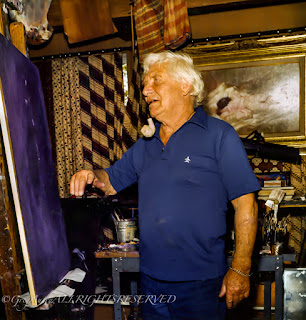 Directly above is a photo I took of Julian working in his studio on Torito Road, in Summerland, California. The painting shown at the top of the page, served as a study piece for a much larger painting, done later, in which Julian inserted a self-portrait of himself sitting amongst the same "proper" society lady, as well as an assortment of nude showgirls, and working girls.  He would use the same pose several times, he loved the arch of her back, as a means of portraying societies "straight laced" attitudes towards sexuality. Julian spent a lifetime painting, and in that lifetime he strived to portray a woman's sensuality and sexuality as something that should be celebrated , not shamed. 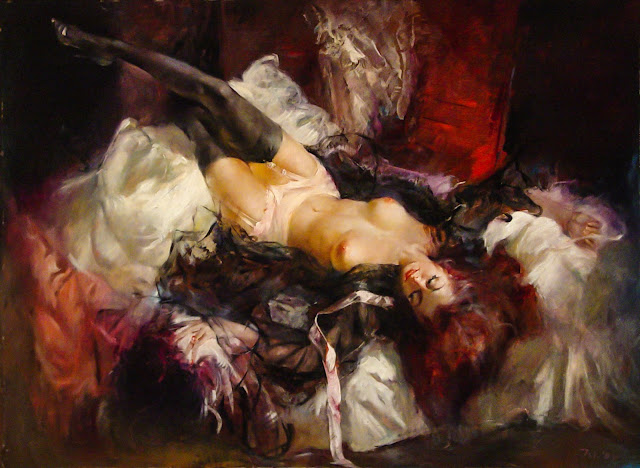 The Reclining Nude above also comes from the Silver Slipper Collection, and was in fact a centerpiece of the collection. Having hung in the opulent entry to the Casino for many years, it was simply called, the `Entry Piece.'  The Reclining Nude pose, is a Hallmark of the Salon Nudes Julian became famous for.  In the early 1950's these nudes were considered scandalous, thought-of in terms of `New Modern Art,' for the brightness and lively sensuality that was so openly displayed.

These paintings are masterpieces, painted in layers of glazes which create luscious flesh tones of amazing translucense. The figure is rendered in exquisite perfection, with ample breast, pink nipples, and hips raised on a pillow of silk to seduce.

For more stories and information, please go to the Julian Website. You can also contact Greg Autry if you have painting that need Appraisals, or which you may wish to sell.