In 1939 the Golden Gate International Exposition opened on February 18th, on a manmade mudflat island in San Francisco Bay, called Treasure Island. The `Theme’ of the overall Fair was “Pageant of the Pacific.” It would come to be called “The Magic City,” and lasted for only two seasons. The Great Expo was intended to celebrate the opening of the recently completed, Golden Gate Bridge and The Bay Bridge, which were to bring great revelations to San Francisco. The Buildings of the Expo were monumental, reminiscent of the `White City’ of Chicago’s World Fair held in 1893. At night the building were lit in multi-colors and could be seen a hundred miles away. 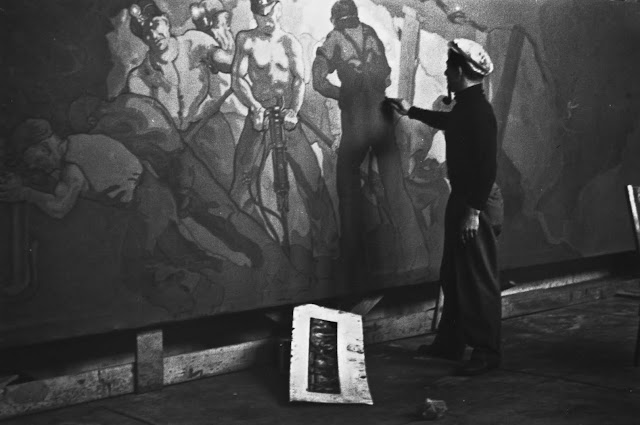 In the 1930’s, the `WPA' (Works Progress Administration), or the `Second New Deal’ would also act to provide jobs to the great many unemployed workers throughout the Country.  The `Federal Project Number One’   employed  artists, writers,  musicians, actors, and directors from around the country, instituted with the intent of getting America back on the road to financial well-being after a decade of suffering the greatest financial  Depression in the country’s history.  The WPA would interact with State and local agencies nationwide, to implement large Arts Programs. Applications from artists were received in the thousands, from around the country.

Julian was out of work in 1938 with little or no prospects. When Julian needed money, he would  load a bunch of paintings into his car and head to art galleries to peddle his wares. Thus was the method which began several successful relationships with Galleries in San Francisco, and a `Peddler’  Julian always remained. He is also aware of all the hype and publicity surrounding the upcoming Golden Gate International Exposition to be held on San Francisco's Treasure Island and he definitely intended to seek out opportunities. Although he did not know how he would do so.

In its infancy, the American Scene Movement is a somewhat depressing, albeit realistic, view of working class Americans. Fueled by Prohibition and the Great Depression, the gaiety and frivolity of the 1920's had long given way to lives of hardship, self doubt, and a preponderance of despair.  This background, magnifying the harsh realities of Julian's upbringing and early childhood, makes it hard to imagine anything but dark emotionally depressing figures emanating from Julian's imagination around that time.

American Scene Painting, was intended to convey a sense of nationalism and romanticism about everyday life in 1930’s America, from small town and rural America, to the big cities. Some consider the American Scene Movement, as a precursor to `Modernism’. Painting Murals, in buildings and Expositions, was coming into vogue as a helpful way to employ artists. Many artists were being influenced by the likes of Fresco Muralist Diego Rivera. Rivera became known for making political statements in Fresco’s, painted in the perfect spaces for such statements, public buildings!

Julian was young, full of life, and confident in his abilities. Never afraid of hard work, Julian took pride in his working class nature and background. Beverly Hills architect Mark Daniels, is in charge of the "Mines, Minerals, and Machinery Building,” at the GGIE. Julian jumps at the opportunity to paint a major statement piece when offered by Mark Daniels. Daniels is impressed with Julian’s repertoire of paintings and pen and ink sketches when the two first meet.
Julian never applied to the State, nor to the WPA, as an artist, however though Mark Daniels a Purchase Order is issued in December of 1938 to `Julian Ritter,’ by the `STATE OF CALIFORNIA-BUREAU OF PURCHASES’ which states as a scope of work;

`To furnish complete, install and in place on Treasure Island in the Building known as “Mines, Metals and Machinery Building”, a minimum of 1,000 square feet of murals depicting the mining industry in the United States.  All work including sketches and finished murals, are subject to approval by the California Commission for the Golden Gate International Exposition.'

Julian immediately likes Daniels because he is `hands on' and not afraid to “get in and get dirty.” Daniels likes Julian's wit, and quick understanding of the process. Julian works diligently on paper sketches and painting color studies for the various figures he envisions. Julian works to incorporate Daniel’s ideas and themes, with his own sense of Spirit and Daniels likes how amazingly fast and accurate Julian's drawings are, and is amazed at the number of paintings Julian turns out as `Color Study’s.’


Some of the Studies were as large as 36 x 24 inches, masterfully painted, and would remain in Julian’s private collection for years; Julian unwilling to part with them until that is financial necessity required selling them. 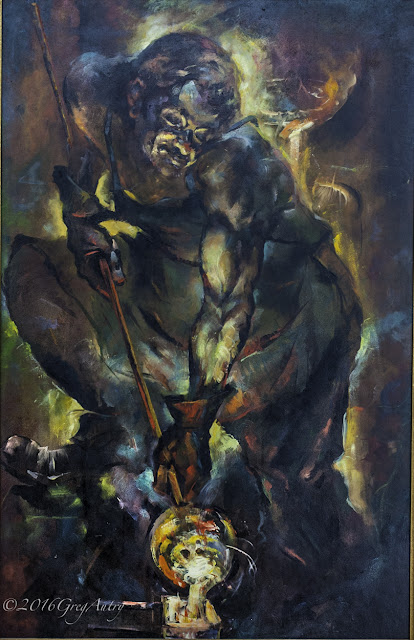 An artist himself, and a highly successful architect, Daniels sees Julian's work as more than just superb draughtsmanship. As the mural unfolds in paint, he recognizes the true Genius of Julian Ritter.  Julian would only have two months to do preliminary sketches, paint some studies to get color palette and details approved, and to complete the mural. When completed it was over 10 feet tall and almost one-hundred feet long.   At this time there are no photos of the actual mural which have been found. There is one photo from a newspaper article at the time seen above, depicting Julian at work, painting the mural. One study painting [above] has been located in a private collection, which was sold by Julian in 1948.
For the mural, judging by the little available evidence now we see that Julian created  figures of strong, hard, rugged working men in the great industries which would define the USA in the first half of the Twentieth century. Rather than portraying the resentfulness of the hard times as so many other American Scene muralists, Julian's figures are infused with men, happy to be working and swelled with that camaraderie that groups of workers, and teams of men come to understand. There is an emotional uplift is Julian's work and Architect Mark Daniels see’s the Spirit of Julian's soul transfused into his work. Mark Daniel's was also a man of distinction. With their working relationship blossoming, Daniels gave Julian additional jobs to paint for the exposition, as well as introducing him to prominent people in San Francisco, people who came to buy more of Julian’s paintings.

It was reported that all of the Art on Display at the `GoldenGate International Exposition’ would amount to $ 20,000,000.00.  Whether accurate or not, the Exposition was instrumental in propelling Julian into the ranks of commercial free lance professional artist.  The 1939 GGIE would result directly and indirectly to Julian’s success and the spread of his name and his work, throughout the United States.

Because of his `Mural' for the Exposition he also got similar work for restaurants, hospitals, and even real estate offices. Although there is scant record today, he is known to have produced murals, and wall paintings, for several San Francisco hotels of an illicit nature. Bordellos in North Beach were common [see STORY about Bimbo's 365 Club.]

After Julian’s participation in the 1939 GGIE, he was offered and accepted two shows in New York City. In 1941 Julian made his New York City debut at The Newhouse Gallery, as well as The Gallery of Modern Art.
The original Fair had opened February 18, 1939, and would ultimately close September 29, 1940. The Fair’s theme, emphasizing unity between Pacific nations, would last no longer than the Fair itself.  It had been planned that the Fairgrounds would become a part of the “new” San Francisco airport after the Fair closed, however world events would intervene and the US Navy would take over the land and buildings as part of the upcoming war effort, building a large presence on the island, along with the new Alameda Naval Shipyard. Julian would spend the war years, in the US Army, where he would ultimately marry his first love, Hilde.

Jan 2017, The Main Administration Building on Treasure Island.
The only remaining building from the Great 1939 Exposition.

Today, both the Fair Grounds on Treasure Island and the Navy Shipyard in Alameda are abandoned. There remains only one, `Main, Administration Building’ from the ’39 Expo, still standing on Treasure Island. While it is nearly abandoned, it does offer a glimpse into the ornate grandeur of the past. 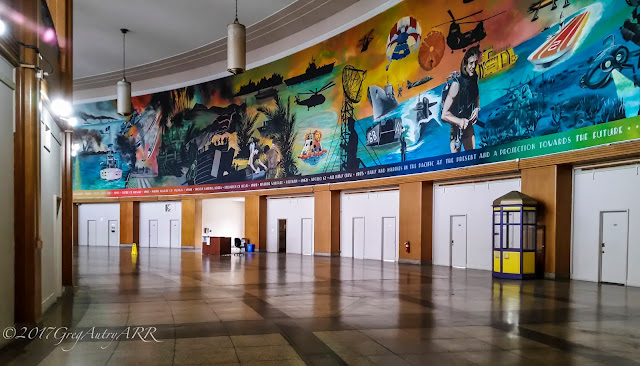 Jan 2017 - Interior of the `Main Administration Building' on Treasure Island. 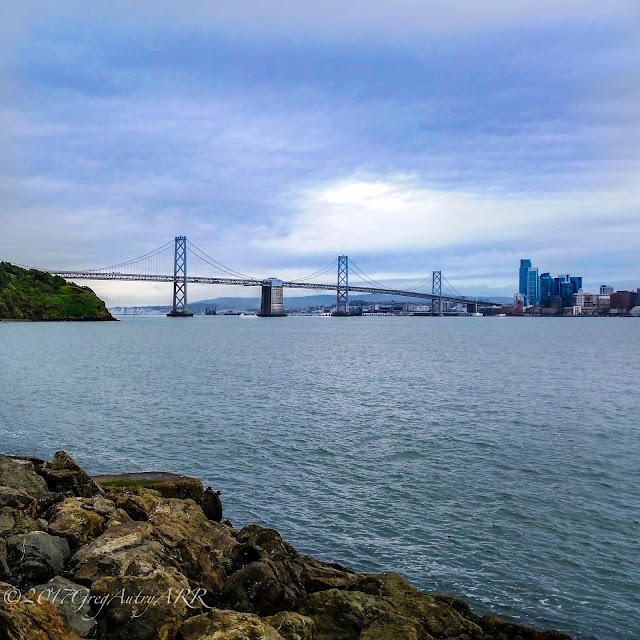 Jan 2017 -  The Bay Bridge and City of San Francisco, seen from Treasure Island.

There is proposed new housing and related commercial development for Treasure Island, with hopes and promises, of resurrecting the `Administration Building’ as a living Museum. And surely, somewhere, there are photographs to be found, of Julian’s work at the Fair, as well as more study paintings by Julian to be discovered.

*Photo of Julian Painting at the 1939 GGIE from Newspaper Article in the Julian Ritter Estate Archives. The Artists Estate retains all copyrights to the original image.