In early 1950 Julian went to Las Vegas for the first time, and made a Sale of 13 paintings, which would be the first installment of `The Silver Slipper Collection.'  The Silver Slipper Casino, over the next eighteen years Julian would add to the collection through various owners, as well as paint untold numbers of paintings for Dealers, Patrons, and Mob Bosses throughout the town. 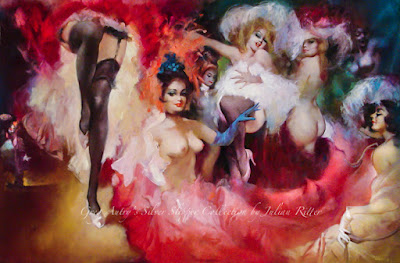 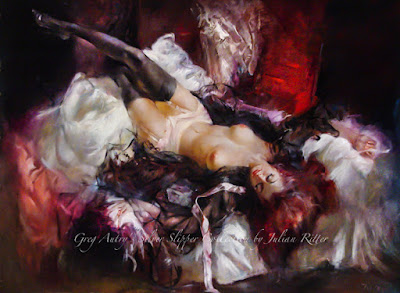 
The first thirteen paintings in the collection were of nudes and showgirls. Moe Dalitz and Benny Binion were instrumental in the collection. Instructing Julian to paint Nudes worthy of a first class Parisian Bordello. 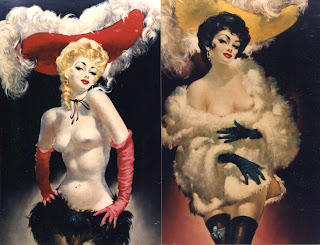 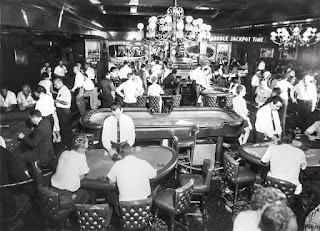 In what would become known as his `Salon Nudes,' Julian embarked on paintings of Showgirls, Clowns, and Nudes, which would become the bane, and the hallmark , of his career.  As had happened in bars and bordellos before, and would happen in the future, his paintings garnered such incredible response from the public and art patrons, so as to cause crowds and response beyond what the various establishments were prepared for. 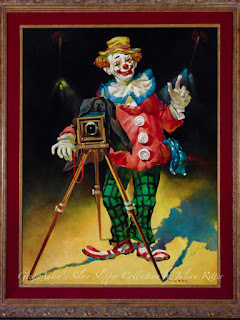 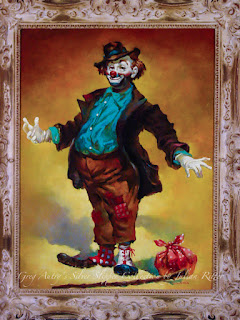 
Never had the public seen such lively, vivid, and overt sensuality on display. Crowds lined the Silver Slipper Casino during the days, and everyone wanted a painting by the flamboyant artist. Cooks, and hat check girls, not to mention the Showgirls and Performers. Julian took special interest when `girls' approached him with special request. 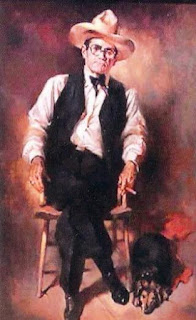 At the same time, it was the Pit Bosses, the Dealers, and the ribald assortment of `Family' members who would monopolize a great deal of Julian's time and efforts. Their "request" were more than simple request, and Julian understood he must keep them "Happy."  Untold numbers of paintings remain in family treasures around the country. Three of the most famous painting were of portraits of Moe Dalitz, Doby Doc, and Benny Binion. The portrait of Doby Doc with his dog, hung in Benny Binion's office in the Horseshoe Casino, for many years, and is now part of a private collection, in Las Vegas.


Beginning in 1966 with the Desert Inn, Howard Hughes began slew of Las Vegas acquisitions, which would ultimately oust the Mob from Vegas, as it had been known. Hughes last Casino acquisition was the Silver Slipper. Many rumored reasons why he bought the property are strictly that, rumors. Truth be told, Hughes believed the property's value lie in its proximity to other properties and he saw great future value in that.

It was also a money maker and garnered a steady income stream. But when Hughes "people" made the purchase, they failed to clearly secure the rights to the paintings that had been done by Julian over the years, and which still hung inside the Slipper and by now, were in fact what added the real world character to the Casino.  Hughes had to go to court to fight the "Sellers" and to argue that the Paintings, were in fact , part of the "furnishing."

What turned out to be the deciding factor, was the fact that the "Owners" had ill-advisedly "screwed" the painting in their frames onto the walls of the casino, rather than "hang" the art work in a traditional manner. Julian , along with Bernie Schantz, were called to Las Vegas  to testify as to the value of the collection, and Hughes was awarded the collection in full. Although, he did have to pay some restitution. 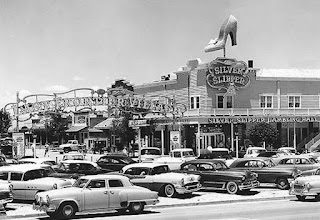 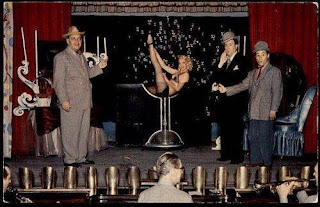 
I would be very interested in finding an appropriate venue, to do a show and exhibition of the Collection.  Contact me if you are interested.
Posted by Unknown at 4:29 PM